What’s it all About? 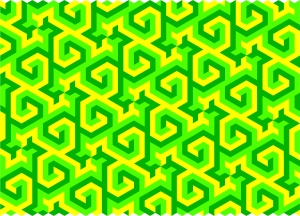 A scrutiny reveals that the dark green, light green and yellow shapes that make up the tessellation (I use this term rather than tiling to lose the subconscious connection with bathrooms) are all of the same shape and are uniformly narrow. The whole pattern is highly symmetrical. There are points, hexad axes of symmetry, about which the shape of the pattern looks the same every time you rotate 60 degrees, other points, triad axes of symmetry, where 120 degree rotations achieve the same effect and, finally, dyad axes of symmetry (at the centre point of each shape) where a80 degree rotations bring the pattern round again. I call the shapes making up this pattern the supertiles. Each supertile of Diamond (8,5) is made up of 86 equilateral triangular tiles, its arms just one triangle wide, it is an example of a polyiamond if you know what those are (generalised diamonds – assemblages of equilateral trinagles).

Here’s a member of another family of the tribe – Dart Lattice Labyrinth (6,6), with each supertile made up of 36 equilateral triangular tiles.

I’ve picked out just a few of the rather humanoid supertiles to indicate the potential of such a design as a source for a striking logo.

I found these fruitful families during an extended journey starting with Lattice Labyrinths made of squares – have a look at some of the posts. I can give a powerpoint-illustrated talk about this journey of discovery – An Adventure in Recreational Mathematics – or Dot-to-dot with a Difference suitable for both nerdish and arty audiences in schools, universities or not-too-learned societies. A how-to-do-it workbook is being (November 2013) published by Tarquin (see the Book page); a more complete and more formal book is (2013) in preparation.

Until the latter “big book” appears, this blog will fill a gap, showing just what can be done. I am interested to hear from anyone who would like to use or develop any of the patterns illustrated or if you have mastered the techniques and would like to share your own results. You can follow or comment in the usual way, or , if you’ve “no time for that sort of nonsense” (to quote Shere Kahn in the Jungle Book), just e-mail me.

* A plane tiling T is a countable family of closed sets T = {T1, T2,….} which cover the [Euclidian] plane without gaps or overlaps.  Grünbaum and Shephard  (see Bibliography).