HURRAH!  2017 is the first tessellatable year since 2011, either on the square or on the triangular lattice. To start with the last but best image I’ve found: 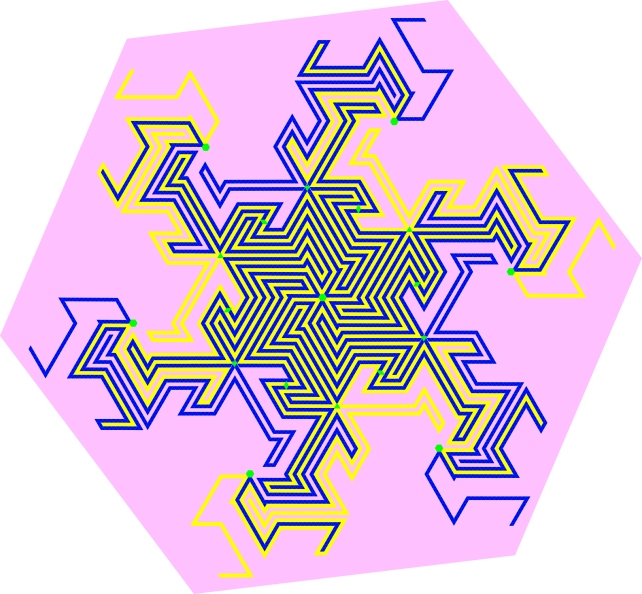 This shows symmetry axes and six supertiles of Trefoil Lattice Labyrinth (41,7), each supertile comprised of 2017 equilateral triangles. Here’s just one of the supertiles that fit together to potentially cover the infinite plane:

This unexpectedly wayward shape is in fact generated by an elegantly simple missing-links graph which I arrived at only by a hit-and-miss evolutionary process – a metaphor of last year’s wayward results of evolved democratic processes?

To construct a tessellation on the square lattice we set out points by counting a along one axis and b along the other, forming squares of area a²+ b², so for a number, such as 2017, to be the area of the repeat unit (fundamental domain) of a   tessellation on the square lattice it is necessary that it can be partitioned into the sum of the squares of two integers, a and b (one of which may be zero). This is possible only if the number in question is of the form 4m, 4m+1 or 4m+2, never of form 4m+3. You can get a feel for why this is the case by drawing dots in square arrays or sticking matchsticks in a pinboard. Less obvious intuitively, it is also necessary that all the number’s prime factors (raised to whatever power they occur) must also be of one of the allowed forms. (See Conway and Guy’s Book of Numbers (expensive in paper). For instance, if 3 is a factor, or 3³, no tessellation is possible because both these powers of a prime are of form 4m+3, but if 3² is the factor, this presents no problem, as we can see that 9 can be expressed as 2m+1 where m=4.

For tessellations on the triangular lattice we set out points counting e  and f along axes at sixty degrees to one another, and the area of the triangles so constructed will be the Loeschian number  e² + ef + f². There is an analogous rule for the form of Loeschian numbers. All are of form 3n or 3n+1, never of form 3n+2. Again, you can get a non-rigorous feel for this by counting points or matchsticks set out in triangular arrays.   Once again, this rule applies not only to the number itself but also to all its prime factors, raised to a power if it occurs as such. So 2 or 2³ cannot be factors of a Loeschian number but 2² can be, as 4 can be expressed as 3n+1, where n=1.

Note that the “tessellatability test” is a member of that beguiling but frustrating family of theorems that tells you whether something exists but includes no method of deriving it. One has confidence that e and f exist (there may be more than one possible pair) but get no further help towards finding them.

End of digression. At last we come to:

Many of us are anxious that 2017 will be a difficult year, and so it proved when searching for a satisfactory tessellation on the square lattice. The standard missing-links graph for a Chinese lattice Labyrinth, consisting simply of nest of squares, work as always but leads to a very swastika-like (“swastikoid”) supertile. Attempt after attempt to use non-standard missing-links graphs failed – what emerged would have been (if completed) a tessellation of tiles within tiles rather than a monohedral tessellation. Here is an example:

At this point (a dyad axis) I gave up, as the tessellation graph traced thus far, if copied, rotated through 180 degrees and joined up, would lead directly to the next superlattice point –  far too quickly, leaving most lattice points unvisited. I suppose I’d better show you what transpires if I do keep right on to the end of the road … tho’ the way be long … keep right on round the bend as the rather appropriate old song goes. So here it is:

– very  (left-leaning) swastikoid of course. I’ve used three colours to distinguish the (two) different shapes that make up the tessellation, but two colours would do, yellows being surrounded by blue and vice versa.

Eventually, I arrived at a successful tessellation, but still reminiscent of a shape disgraced in Western eyes, though there is no such problem in South East Asia.

and finally, employing a radically new type of missing-links graph, a pattern that I feel able to recommend as a suitably tortuous representation of a year through which there is no clear path for many communities and nations.

I’ve illustrated all these designs against skies that at this time of year represent a Shepherd’s warning.

The Lattice Labyrinths workbook  is available from the publisher or you-know-who , or from a good independent bookshop or via Google

After terminating academic and local government careers, long an independent bookseller/publisher at Scarthin Books, Cromford, Derbyshire, UK. An antiquarian bookseller in two senses, I now have more time to be an annuated independent post-doc, developing the long dormant topic of lattice labyrinth tessellations - both a mathematical recreation and a source of compelling practical tiling and textile designs. Presenting a paper and experiencing so many others at Bridges Seoul 2014 Mathart conference was a great treat, as were the spirited MathsJam Annual Conferences in November 2016 and 2017. I'm building up to a more academic journal paper and trying hard to find practical outlets in graphic design and landscape architecture. I submitted 8 ft square tiling designs to the Wirksworth Festival Art and Architecture Trail in 2016 and 2017. I love giving illustrated talks, tailored to the audience. Get in touch to commission or to collaborate.
View all posts by davescarthin →
This entry was posted in Birthyear Labyrinths, Chinese Labyrinths, Trefoil Labyrinths and tagged 4n + 3, Book of Numbers, Bridges 2017, highly composite, Loeschian, polyiamond animal, polyomino animal, richard k guy, sum of squares, tiptoe tentatively. Bookmark the permalink.