A Complete Hip Replacement Tessellation for Thornbury Hospital, Sheffield & the NHS, from a Grateful Hipster

For the technical brilliance of my Complete Hip Replacement operation at Thornbury Hospital, Sheffield I am more than grateful, but I cannot personally endorse the craftsmanship as, in addition to the epidural total-nether-number (pronounced “nummer”), I opted to be “put to sleep” for the duration. The duration seems to me to have been negative as I woke up in the recovery suite BEFORE the  general anaesthetic had even been administered! At any rate, that’s what I remember. I was referred to this BMI hospital by the NHS, Britain’s pioneering, legendary and embattled National Health Service, and the interval between my (belatedly) requesting to be referred for the procedure by my GP (General Practice) doctor and the actual operation was just three months. 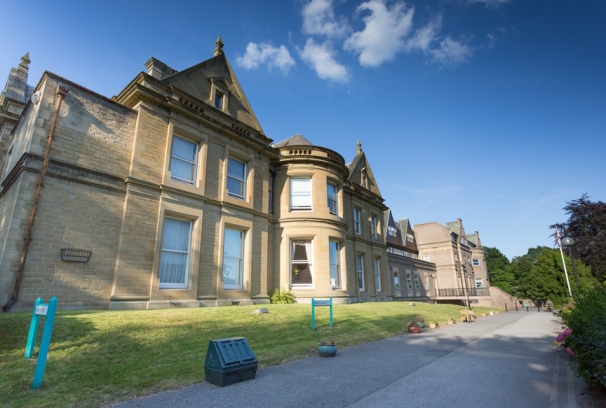 For much of January and February I considered myself to be on HIP ROW, hoping for much longer stays of operation, but the hip in question adopted a different  OP-WISH strategy so in the end I was EAGER for the PROCEDURE. Thank you to the consultant anaesthetist, whose name alas I didn’t gather, and, of course, to Prof. Ian Stockley who radiates reassurance and, I think, joy in his work and who has become Hip Replacement Surgeon by Appointment to Scarthin, the hamlet within Cromford where I live and work. After the operation, my three nights’ individual-room bed and board was simply luxurious. So thanks also to Mappin Ward and to the smiling nurses, most with the Sheffield and South Yorkshire accents that reminded me of my Conisborough roots. By day the sun lit up the valley sides, by night the owls hooted in the trees under the moon.

The sometime Birmingham University Wayfarer Chris Ford tells me he has reached HR50, the age at which half his friends have had a hip replacement, said by Prof. Stockley to be the second-best of all “routine” operations, after cataract-removal. I think he is citing both the high success rate and the life-transforming effect.

OP DAY was Monday 22nd. February, 2016.The number pair (22,2), taken to be  separation parameters on the triangular lattice, corresponds to a  Lattice Labyrinth in the Trefoil family because 22 – 2 = 20 is not divisible by 3. For (a,b), if a-b IS divisible by 3, a Honeycomb Labyrinth (and a Diamond or Dart Labyrinth) results.

As a thank you for my “free” operation, this time I won’t hide the stages by which the tessellation is constructed. First of all we set out  superlattice points on the triangular grid, each at separation  22 lattice points  across and 2 lattice points at 60º up and then repeating the construction symmetrically to produce the superlattice array. At each of the superlattice points there is a hexad axis of 6-fold rotational symmetry (see Rotational Symmetry simply set out, an early blog post). It helps to find our way around if we also mark in the triad 3-fold and dyad 2-fold axes. Crucially this completes the very same symmetry group as displayed by the triangular lattice itself.

Now for the creative bit – which means I have no hard-and-fast rule for this procedure – constructing a valid missing-links graph, so named because it uses up ALL the lattice links that will NOT form part of the tessellation graph. First of all, around each hexad axis I draw in the biggest nest of hexagons that I can without the outermost hexagons overlapping. I then know from experience with separation parameters which share a common factor (2 in this case) that the dyad axis lattice points are potentially hard to reach in a symmetrical fashion, but also from experience I know that a paddle wheel construction, also shown in red, centred on each heaxad axis, will do the trick.

The missing-links graph elements have to pass through every lattice point twice, except for the hexad-axis superlattice points, so as to leave just one route through each lattice point unused. The green constructions made up of triangles and closed triangularish figures symmetrical about each triad axis complete this job. This particular green assemblage is the most elegant I’ve found, there may be other possibilities for this part, or even for the whole, of the missing links graph. here it is.

Now for the automatic, but entertaining job of tracing the graph made up of just those lattice links NOT used in the missing links graph. To shorten the task we can take advantage of the symmetry which means we only need to trace the graph, by way of the only links left unused, from one superlattice hexad axis point to the next. We can then take advantage of the rotational symmetry and of the repetition at (22,2) separations to construct as little or as much as we like of the infinite tessellation graph. Here is enough to demarcate just six trigonally symmetric supertiles, three in each of the two orientations at 180º to each other – the equivalent of the equilateral triangles that make up the basic lattice itself. 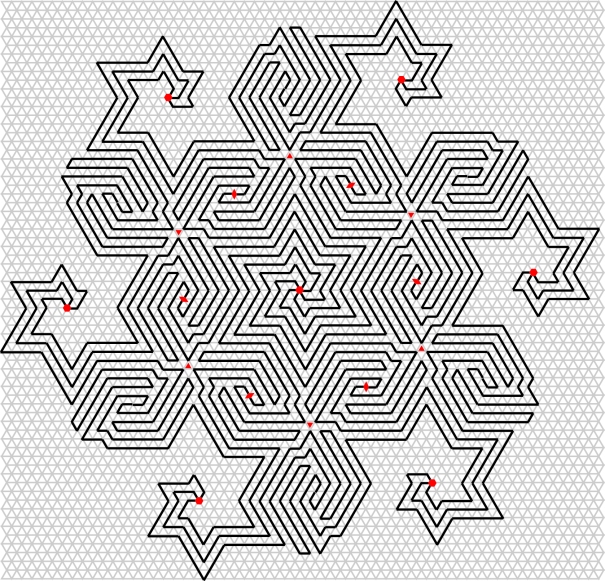 Like magic, isn’t it!  Finally, here it is, coloured in:

The Lattice Labyrinths workbook  is available from the publisher or you-know-who , or from a good independent bookshop or via Google.

After terminating academic and local government careers, long an independent bookseller/publisher at Scarthin Books, Cromford, Derbyshire, UK. An antiquarian bookseller in two senses, I now have more time to be an annuated independent post-doc, developing the long dormant topic of lattice labyrinth tessellations - both a mathematical recreation and a source of compelling practical tiling and textile designs. Presenting a paper and experiencing so many others at Bridges Seoul 2014 Mathart conference was a great treat, as were the spirited MathsJam Annual Conferences in November 2016 and 2017. I'm building up to a more academic journal paper and trying hard to find practical outlets in graphic design and landscape architecture. I submitted 8 ft square tiling designs to the Wirksworth Festival Art and Architecture Trail in 2016 and 2017. I love giving illustrated talks, tailored to the audience. Get in touch to commission or to collaborate.
View all posts by davescarthin →
This entry was posted in Birthday labyrinths, Trefoil Labyrinths and tagged 2.22.2016, 22.2.2016, BMI Thornbury, Epidural, February 22nd, Ian Stockley, Mappin Ward, referral from the NHS to a private hospital, Scarthin, tessellation graph, Thornbury Hospital, trefoil lattice labyrinth. Bookmark the permalink.

4 Responses to A Complete Hip Replacement Tessellation for Thornbury Hospital, Sheffield & the NHS, from a Grateful Hipster