Posted on February 5, 2015 by davescarthin

Where to sit at the grand Gwangbokjeol   조국해방의 날 Dinner for delegates to the  Bridges 2014  Conference in Seoul? I was one of the last to descend the stairs to the conference centre floor and the tables were filling rapidly. I had met a Taiwanese couple while struggling to communicate with a Korean-speaking laptop; they caught my eye and beckoned me over to their table for what became a memorable evening. (See the Thank You to Bridges and Gwangbokjeol posts) As a belated thank you, here is a link to Bih-Yaw Jin’s  Torus Knots paper and a realisation of Honeycomb Lattice Labyrinth (10,10) in hounour of Taiwan’s National Day, Double Tenth Day, 國慶日/雙十節 , rendered in an approximation to the colours of the flag of Taiwan. Each supertile consists of 600 equilateral triangles and the way these are distibuted across six parallelogram about the axis of hexagonal symmetry generates a compelling three-dimensional effect.

Here is a guerilla tessellation of Liberty Square, Taipei employing the same Lattice Labyrinth design. A bit too brightly coloured, perhaps. And who can that be in the foreground? 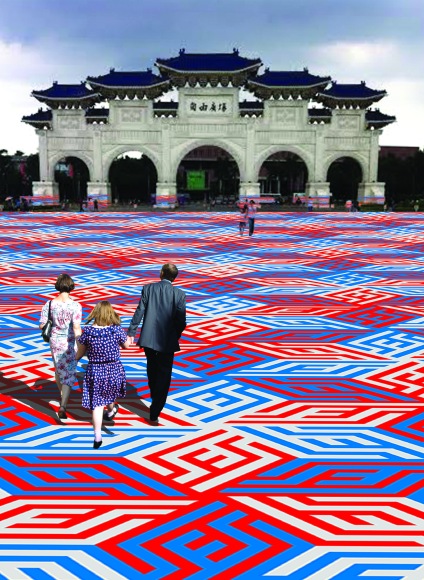 Whoever they are,  they can be glimpsed again, approaching Taipei City Hall. 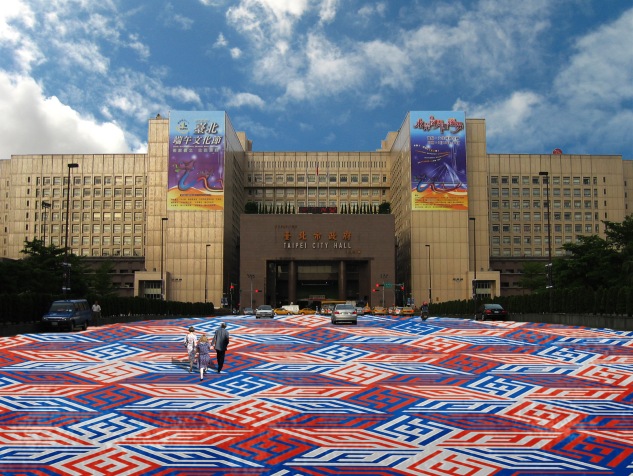 What I see as a shrivelling of opportunities in the United Kingdom is leading to a diaspora of enterprising young Britons across the world.  Darren Booker, the brother of David, who manages Scarthin Books ,  runs a British-themed Fish and Chip restaurant and music venue in Taipei, so I’m sending my best wishes to Dazzler’s. I believe he’s about to open a  branch at the seaside.

Comments are welcomed at latticelabyrinths@gmail.com and the link How to do it  will take you to a source for the inexpensive Lattice Labyrinth Tessellations  workbook.

After terminating academic and local government careers, long an independent bookseller/publisher at Scarthin Books, Cromford, Derbyshire, UK. An antiquarian bookseller in two senses, I now have more time to be an annuated independent post-doc, developing the long dormant topic of lattice labyrinth tessellations - both a mathematical recreation and a source of compelling practical tiling and textile designs. Presenting a paper and experiencing so many others at Bridges Seoul 2014 Mathart conference was a great treat, as were the spirited MathsJam Annual Conferences in November 2016 and 2017. I'm building up to a more academic journal paper and trying hard to find practical outlets in graphic design and landscape architecture. I submitted 8 ft square tiling designs to the Wirksworth Festival Art and Architecture Trail in 2016 and 2017. I love giving illustrated talks, tailored to the audience. Get in touch to commission or to collaborate.
View all posts by davescarthin →
This entry was posted in Honeycomb Labyrinths, National Labyrinths and tagged Azulejos, British themed, Dazzler's, Double Tenth Day, Fish & Chips, guerilla tessellation, Irrgarten, labyrinth, Lattice, Modest Mathematics, Mosaico, October 10, Seoul, Taipei, 國慶日/雙十節. Bookmark the permalink.