Tessellations for the Rio 2016 Olympics Opening Ceremony, or Dribbling Practice

Posted on January 2, 2015 by davescarthin

The 2016 Olympic Games open (or opens) in the Maracanã Stadium in Rio de Janeiro, Brazil on August 5. The number pair to inspire a Lattice Labyrinth tessellation is therefore (5,8), or (8,5)  the mirror image. There are several too many colours in the Olympic logo – one for each of the five rings.  Designers are better these days (see the Rio logo below). This feast of five colours does fit quite well with a “cross” of five supertiles of Chinese Lattice Labyrinth (5,8). There really is a distinct yellow supertile in the centre, though the background makes its boundaries quite hard for the eye to fix. Each supertile is made up of 89 square tiles – easy to source in many choices of material. The result if constructed at the right scale (say 200mm x 200mm slabs) would be great for football dribbling practice, and that ought to be part of any Brazilian opening ceremony!

( Note: This post was originally uploaded in January 2015 and has been viewed from Brazil many times but without so far as I know any actual employment of the pavings suggested. I’ve updated it just two days before the actual opening date, having noticed a flurry of visits brought about by the increase in Googling activity immediately preceding the Games)

– but an attempt to use the five colours for a paving of  seven supertiles of Honeycomb Lattice Labyrinth (8,5) and its background agora is perhaps a bit much to digest, The Rio Olympic Logo sensibly concentrates the Olympic colours into three shade ranges.

Here is the Olympic Honeycomb Labyrinth in just three colours, each supertile is made up of 258 equilateral triangles. 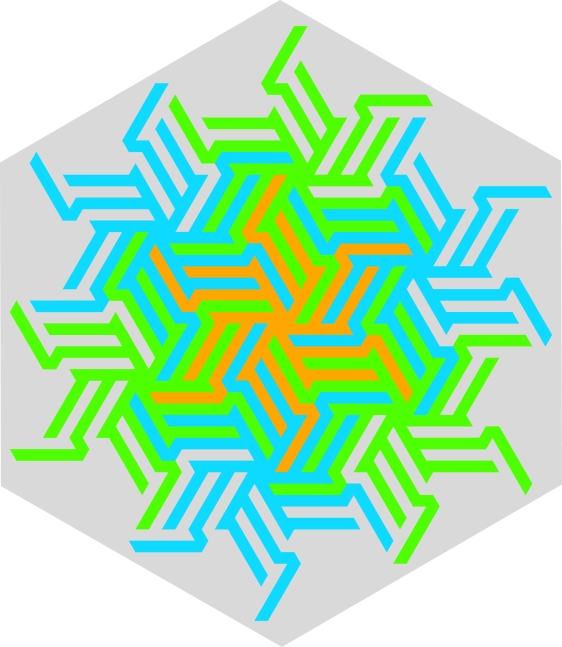 This is a dynamic design, the arms of each supertile busily interacting. Football dribbling along their corridors would be much more fluent.

-and finally, here’s another version of the Chinese Lattice Labyrinth (5,8) in vaguely appropriate colours. The hint of swastika, harmless in Asia but taboo in the West, is hard to escape from altogether.

P.S. Links to the how-to-do-it workbook: From the publisher, or via you-know-who , better,  from a good independent bookshop or just Google.

I am complemented and intrigued by the recent downloading of no less than 40 images from this blog by (most likely) un homme Francais  or un italiano. He or she can contact Dave Mitchell the blogger via latticelabyrinths@gmail.com but probably won’t want to.

Thanks to Don Steward for posting some lattice labyrinths material on his mathematical education blog.

After terminating academic and local government careers, long an independent bookseller/publisher at Scarthin Books, Cromford, Derbyshire, UK. An antiquarian bookseller in two senses, I now have more time to be an annuated independent post-doc, developing the long dormant topic of lattice labyrinth tessellations - both a mathematical recreation and a source of compelling practical tiling and textile designs. Presenting a paper and experiencing so many others at Bridges Seoul 2014 Mathart conference was a great treat, as were the spirited MathsJam Annual Conferences in November 2016 and 2017. I'm building up to a more academic journal paper and trying hard to find practical outlets in graphic design and landscape architecture. I submitted 8 ft square tiling designs to the Wirksworth Festival Art and Architecture Trail in 2016 and 2017. I love giving illustrated talks, tailored to the audience. Get in touch to commission or to collaborate.
View all posts by davescarthin →
This entry was posted in Birthday labyrinths, Chinese Labyrinth, Honeycomb Labyrinths, Olympic Labyrinths and tagged 5th. August, 8 5, Brazil, Brazil Games, dribbling, dribbling practice, Labirinto, lattice labyrinth, Maracanã Stadium, Olympic Games Logo, opening ceremony, Rio Games. Bookmark the permalink.