Before I reveal a zestful tessellation in honour of the 2014 World Cup competition, here is the basic tessellation (the lowest-order member) of the Dart Lattice Labyrinth family. 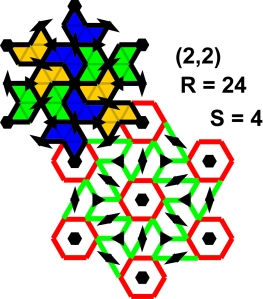 The lower part of the diagram is the complementary or missing-links graph, higher-order versions of which are relatively easy to construct, the tessellation graph being made up of just those lattice links not included in the missing-links graph. The separation parameters (2,2) determine the scale at which then pattern repeats itself, each supertile of the tessellation consisting of S = 4 triangles. Six supertiles, of area R make up the repeat unit or fundamental domain of the tessellation. You can see how six are clustered into a hexagon; easy to repeat to extend the pattern. The hexagon appears on the standard design of the cladding of a football, interspersed with pentagons – something I can’t as yet labyrinthate/labyrinthise/labyrinthize.

Dart Labyrinth (12,6) is an altogether more challenging family member, with a repeat unit of 504 equilateral triangles. The Association Football World Cup 2014 began on 12th. June, hence the choice of a celebratory pair of separation parameters, which do indeed correspond to a Dart Lattice Labyrinth. If your birthday is on June 12th., then this is for you too. It’s taken me days to find the days to find a construction, hence the delay. Here it is, also approximately in the colours of the Brazilian Flag. 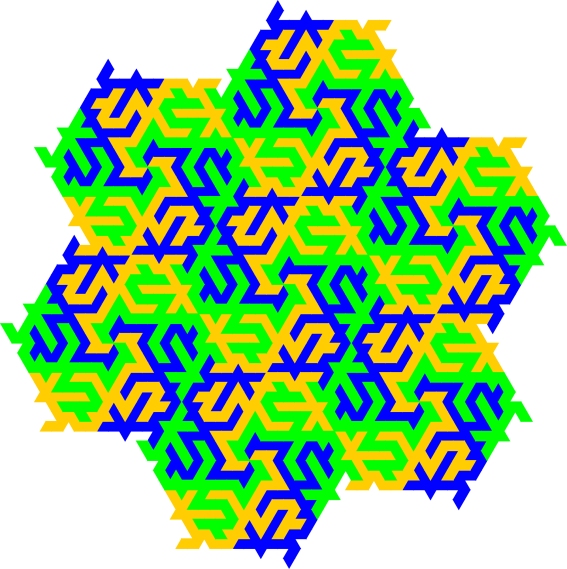 The supertile shape (made up of 84 triangles) vaguely suggests all sorts of animal or human shapes, depending on its orientation. here are the six, separated out.

I think Picasso in his inappropriately-named cubist period could have used several of these to represent  football players caught in contorted attitudes, airborn in the goalmouth. I’d be really interested to see  such an or unsuch an Escherisation/Escherization of these shapes.

P.S. Links to the how-to-do-it workbook: From the publisher, or via you-know-who , better,  from a good independent bookshop or just Google.

After terminating academic and local government careers, long an independent bookseller/publisher at Scarthin Books, Cromford, Derbyshire, UK. An antiquarian bookseller in two senses, I now have more time to be an annuated independent post-doc, developing the long dormant topic of lattice labyrinth tessellations - both a mathematical recreation and a source of compelling practical tiling and textile designs. Presenting a paper and experiencing so many others at Bridges Seoul 2014 Mathart conference was a great treat, as were the spirited MathsJam Annual Conferences in November 2016 and 2017. I'm building up to a more academic journal paper and trying hard to find practical outlets in graphic design and landscape architecture. I submitted 8 ft square tiling designs to the Wirksworth Festival Art and Architecture Trail in 2016 and 2017. I love giving illustrated talks, tailored to the audience. Get in touch to commission or to collaborate.
View all posts by davescarthin →
This entry was posted in Birthday labyrinths, Dart Labyrinths and tagged Brazil, Brazilian Flag, Bridges 2014, Irrgarten, labyrinth, labyrinthe, labyrinths, Lattice Labyrinths, Loeschian, Maze, mazes, Rio de Janeiro, tessellation, Tessellations, tiling, Tilings, World Cup 2014. Bookmark the permalink.