After a break while rather optimistically preparing a submission for the Bridges Conference 2014, I’m back again with a Labyrinth specially for Sophie, a ray of energy whenever about the Bookshop. It’s fitting that the birthyear number 2000 is doable only as a Scarthin Labyrinth or its dissection an Olympic Labyrinth. A close look at a diagonally symmetrical supertile of this appropriately beautiful and outreaching tessellation will reveal a central square of squares, which can be divided (in either of two ways at right angles) without upsetting the symmetry of the pattern; the supertiles of the resulting tessellation are then properly SLIM polyominoes, as in the other rigorously constrained families of Lattice Labyrinths. Maybe I’ll demonstrate the result of that transmutation in a new post; closely related tessellations can look quite distinct. All birthdays happy, Sophie.

Incidentally, I found this tessellation after a considerable vague cogitation, one precise failure and some iterative focusing on a successful solution. The form taken by the algorithm is a combination of a simple and elegant primary construction with the rather scratch secondary element that this forces. 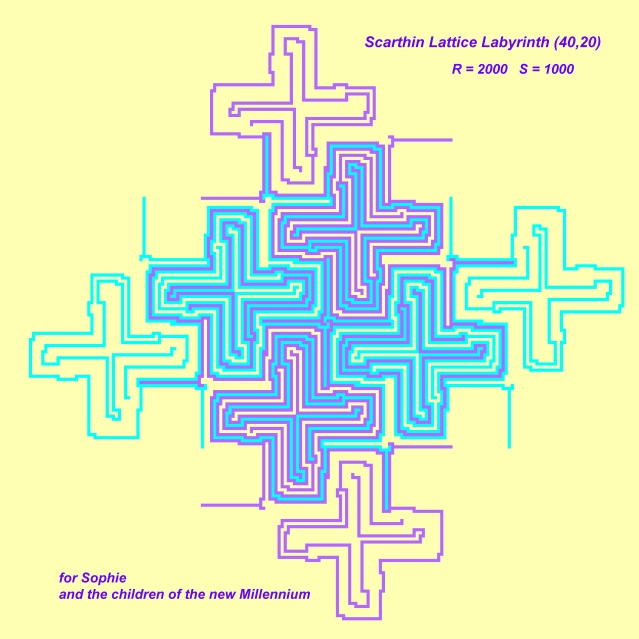 Though much of the world is still made up of tribes or kingdoms in a chronic state of anarchy or war, Britain has so far fared immeasurably better in this new millennium than in the last. To quote again from a translation of the Anglo-Saxon Chronicle.

A.D. 1000 . This year the king went into Cumberland, and nearly
laid waste the whole of it with his army, whilst his navy sailed
about Chester with the design of co-operating with his land-
forces; but, finding it impracticable, they ravaged Anglesey.

After terminating academic and local government careers, long an independent bookseller/publisher at Scarthin Books, Cromford, Derbyshire, UK. An antiquarian bookseller in two senses, I now have more time to be an annuated independent post-doc, developing the long dormant topic of lattice labyrinth tessellations - both a mathematical recreation and a source of compelling practical tiling and textile designs. Presenting a paper and experiencing so many others at Bridges Seoul 2014 Mathart conference was a great treat, as were the spirited MathsJam Annual Conferences in November 2016 and 2017. I'm building up to a more academic journal paper and trying hard to find practical outlets in graphic design and landscape architecture. I submitted 8 ft square tiling designs to the Wirksworth Festival Art and Architecture Trail in 2016 and 2017. I love giving illustrated talks, tailored to the audience. Get in touch to commission or to collaborate.
View all posts by davescarthin →
This entry was posted in Birthyear Labyrinths, Scarthin Labyrinths and tagged Labyrinths X AlhambraX Birth yearX EscherX HoneycombX labyrinthX labyrinthsX LatticeX lattice labyrinthX LoeschianX mazesX PolyiamondX PolyominoX Recreational MathX tessellationX tiling. Bookmark the permalink.